What is Caltech’s Ditch Day?

Whew! I write to you on the other side of 38 quite hectic days. Since my first post, I had a great four-day vacation to Las Vegas, packed up literally everything I owned, graduated from Caltech, became a California resident, drove up to the Bay Area, moved into my beautiful (albeit overpriced) San Francisco apartment (edit: I don’t live there anymore as of October 2013 — my new place is much nicer and much more overpriced), bought a bunch of furniture, and started my internship at Sift Science.

We look so happy to be leaving all of our friends! Source

Now that I have some time to write again, I can finally start off my 10-part Ditch Day series by explaining to you what Ditch Day actually is.

As I said in the intro post, Ditch Day is not what you might think given the name. The seniors don’t really ditch in the sense of going to the beach and just relaxing all day (even though I’m pretty sure we’d all have liked to). They do have to leave campus, because any senior spotted on-campus will be duct taped to a tree, and classes are officially cancelled for everyone. The latter is because each group of seniors has built an entire day of entertainment, activities, and puzzles (overall referred to as stacks) for the underclassmen to enjoy all day.

On my very first Ditch Day, I worked for an Aperture Science-esque company, where I participated in experiments testing senses and “super-senses”, including taste (having to solve a puzzle with custom-made “tasting gels”), hearing (having to shut off speakers playing the Ride of the Valkyries in a loud and dark room by pushing buttons next to them), pain (having to lick nails connected to a 9V battery to see which were live), balance (having to balance a gigantic suspended metal mobile with our whole bodies), and super-tasting (eating sour food under the influence of Miraculin). More details about that stack are in a blog post written by one of the creators of that stack.

The sign-up poster for “Sense”, the stack I went on my frosh year.

The next year, I was part of a real life version of Achievement Unlocked. We were given an Android phone with an application at the beginning of the day that gave us updates on the achievements we had earned as we solved puzzles such as a 3D minesweeper puzzle (which involved lots of boxes in a room), lifted boxes with QR codes on them with one of the official Caltech construction cranes, and played with a mural in our house that used hidden capacitive plates to respond to touch with sound. Little did we know the Android application (and by extension, the seniors who were stuck off-campus) was listening in on our conversations with the phone’s microphone. 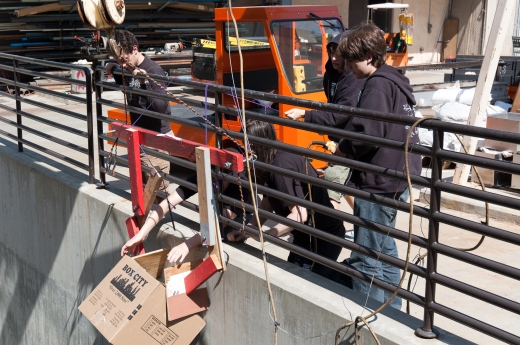 Operating the crane (with wooden claw attached) that we were allowed to use as part of “Achievement Unlocked”.

For my last Ditch Day (on the going on stacks side of things), I went on a Calvin & Hobbes stack, where we hung out in a tree house (no girls allowed!), traveled through time while solving a puzzle that required the use of our safety goggles (3D glasses), and solved a Slitherlink puzzle that had been created in the real world rather than on paper. 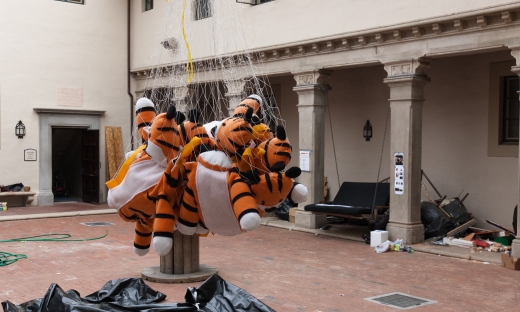 Other awesome stack elements that come to mind are a giant ice wall that people could climb on and a laser maze in the tunnels, and this is all just things that happened while I was there!

Ditch Day wasn’t always this way. A long time ago, Caltech seniors did just ditch classes and go to the beach. The underclassmen thought this was rather unfair, so in true Caltech style, they began pranking the seniors’ rooms. Soon enough, the seniors began to develop counter-measures for pranking while they ditched. These ranged from placing giant concrete barricades and steel plates on their doors and windows to offering the underclassmen bribes (in the form of some cool or expensive things). I’m sure the bribes eventually became things like paying for cool adventures for the underclassmen. Eventually, things escalated to the point where seniors would build these massive elaborate stacks.

As an underclassman, Ditch Day is pretty much the best day of the year. When I was a frosh, I was told that it’s “better than Christmas!” The seniors pretty much spend all of their time from about April (and sometimes much, much earlier) until Ditch Day (toward the end of May) working on their stacks, and it’s always great to see what that much effort out of some of the smartest people in the country can produce. The fact that classes are officially cancelled so that we can do this is especially awesome. However, as an underclassman, we never know when Ditch Day will be! The date is a heavily guarded secret. If you ask any senior, they’ll tell you that “Ditch Day is Tomorrow!” at any point in time, even the newly-minted seniors immediately after the end of the previous Ditch Day — at 5pm, when the cannon fires, the juniors become seniors and the seniors become “ghosts”.

To make things even more complicated, the seniors often hold fake Ditch Days — they’ll make a set of announcements at dinner and even put out stack sign-up sheets the next morning. However, these stacks give you around an hour of content until they tell you “go to bed frosh, Ditch Day is Tomorrow!” By the time announcements are over, and definitely by the time you see the sign-up sheets, it’s generally clear that this is a fake Ditch Day (unless it’s the day before the real Ditch Day and the seniors are trying really hard to fool the underclassmen). However, even the fakes are valuable because they give everyone much-needed logistics practice (when to start waking people up, how to sign up for a stack, what the rules are about signing up, what kind of clues to expect on a stack, etc.) and they are pretty good fun to boot. When the class one year above mine became seniors, I went on a Lonely Island themed stack for their first fake, which involved blasting Lonely Island music around campus at 8 in the morning among other things. For a fake Ditch Day from another year, I got to play a mini laser harp.

On the senior side of things, we get (have) to spend all day being on-call for our stacks, in case an activity fails and we have to cloak-and-dagger our way to campus to fix it, or if they can’t solve a puzzle. In my house, we are always lucky to have a readily available army of recently-graduated alumni who are around to keep things running smoothly, or at all. What we’d really like to be doing is sleeping all day, though, since we just spent a week getting minimal sleep and probably pulled an all-nighter just before. The 90-10 rule definitely applies: I spent the night before doing all sorts of random menial things, like cleaning up some areas we had puzzles in, and debugging some terrible Javascript errors. As a result, a night in which I thought I’d get three or four hours of sleep because we were so ahead in building became a night in which I pulled what was possibly my only true all-nighter at Caltech.

As a senior, you also realize how supportive some departments are of Ditch Day and of students doing cool things in general. In our case, the physics department let us use and have after-hours access to a pretty big space in their large warehouse/lab that contained a lot of expensive equipment for construction and housing of a puzzle. I say some, because some blatantly aren’t. I’m looking at you, Geology and Biology. Both of them wouldn’t let us have the use of classrooms on a day when classes are officially cancelled. Either way, it’s nice to have some evidence that some people are still for keeping the spirit of Caltech alive rather than just paying lip service to the concept.

Overall, if you take away one thing from this post, it’s that Ditch Day at Caltech is a big deal and it’s where a lot of very talented scientists and engineers get to do amazing things. In the next post, I’ll introduce the stack that I spent several months building and one of its most integral components: the plot. Ours was unique of all the stacks that I had seen in that the plot was so important to one’s enjoyment of the whole experience, but I’ll explain that next time.

Oh boy, I’ve always wanted to have a blog and things to write in it! My name is Ilya and I am currently a senior at Caltech, graduating in something like 20 days. I’m starting this blog so that I can write about all of the things that interest me: awesome projects, Computer Science, Starcraft, music, and others.

Caltech’s Ditch Day gives me an excellent opportunity to start off by showcasing a massive project that some friends and I poured hundreds of hours into making happen. As a quick tl;dr (although the very first post I will be writing after this will explain in detail), Caltech’s Ditch Day is not like a senior ditch day at any other school. You might think that on ditch day the seniors just skip their classes and go to the beach. That may be how things started around here, but due to decades of escalation, the seniors now spend months building a fun day of events for the underclassmen in secret. Now, the seniors are happy to just get some sleep on the day of ditch day. Overall, it’s a positive tradition, because it provides an impetus and a framework for accomplishing lots of incredibly impressive engineering tasks.

Unfortunately, putting all that time into Ditch Day means that I need to catch up on the rest of life at the moment.

Not completely sure when all of this is getting done

For now, I will leave you with an unsatisfyingly tantalizing table of contents and the promise that I will, in fact, get around to writing these soon enough. Once I write each post, I’ll link to it from this one.

Whew! That’s a lot of stuff! Hopefully, I’ll have plenty of free time in the next few weeks to get started.