You’re our group of time-travelling frosh, ordered to report to the North end of the old Y building, because Vector Corporation has tracked the saboteur to that location. The Artificial Intelligence tells you that it can sense some strange signatures coming from the building, almost as if there is a time machine active there. You open the door and find that it is pitch black inside. From the little bit of light streaming in through the still-open door, you see signs that instruct you to remove all of your belongings and place them in the “magnetically shielded” (cardboard) box, as there are heavy magnetic fields in the area. You’re also given a very dim, blue keychain flashlight in another box. You have no idea what’s going on.

The door is shut. Now it’s completely dark inside. You notice that there are fake walls set up, made of a thin and reflective material. Your group walks around, trying to figure out what is going on. If your night vision has returned, you might notice some of the buttons around the room. Suddenly, someone in your group gets the bright idea to press one of the buttons. A voice comes on the speakers in the room and says:

“Time machine artificial intelligence online. Time travel protocols initiated. Scanning….Warning! Bombs are being sent from the future to this location. In the event that they are not disarmed, emergency procedures will be engaged to ensure the safety of this facility. Twenty signatures incoming…now!”

Then, all you can hear is a weird series of ticking noises. What’s going on? Then this happens:

That’s an abbreviated video of a typical experience through the mirror maze puzzle. A typical group would take somewhere between 30 and 50 minutes to complete the puzzle/activity, from walking in to finishing. As there isn’t any video of our actual stack going through the puzzle, I took this video during one of the many repeat runs we did during the weekend after Ditch Day (Matt and I liked to joke that we felt like theme park ride operators).

The actual layout of the puzzle was a large maze with mylar walls (we easily bought 10-12 rolls of mylar for this and our other main puzzle). Inside the maze, there were 10 speaker buttons (Ultimarc GoldLeaf pushbuttons next to a computer speaker) and 10 “light-up” buttons (Ultimarc ClassicRGB LED buttons which lit up when they were active). The first button was always a speaker button that was near the door (to ensure that the groups would hear the first one rather than being confused for a long time), and the rest were played in a randomly chosen sequence. Whenever a speaker played the high-pitched “bomb noise” or a light-up button lit up, someone would have to press the associated button within the specified time. Note that there were twenty buttons but only about twelve people, so they had to be fairly efficient in covering the rather large space. 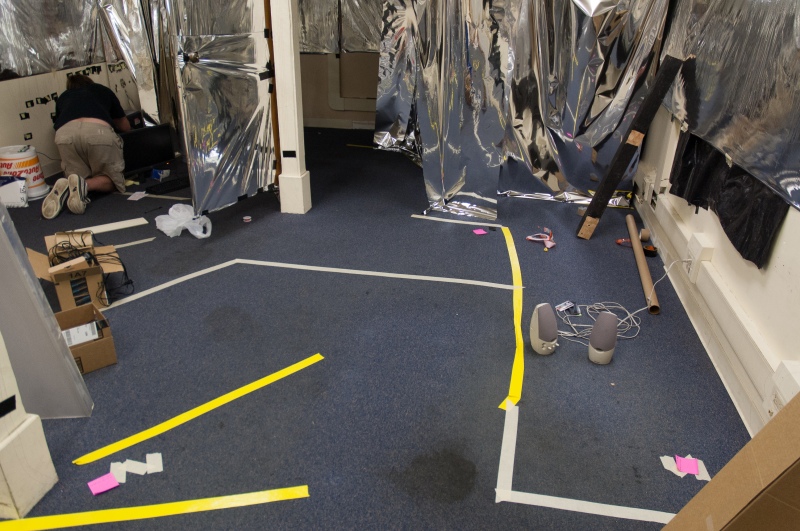 The beginnings of the mirror maze. Note the markings on the ground denoting future maze walls. Those were…mostly followed.

Getting to observe groups solving this was great, because you could actively see learning occur. In some order, the groups had to realize which buttons to press (the ones that were beeping or lighting up), that there was a back room that was hidden by a door screwed into one of the pillars in the room, that there was no set order to the buttons so the group had to manage to cover all of them, and the best strategy to cover all of the buttons. At first, the group would spend its time shouting and trying to figure out the best strategy. By the end, they would work in near complete silence, as you can see in the video. 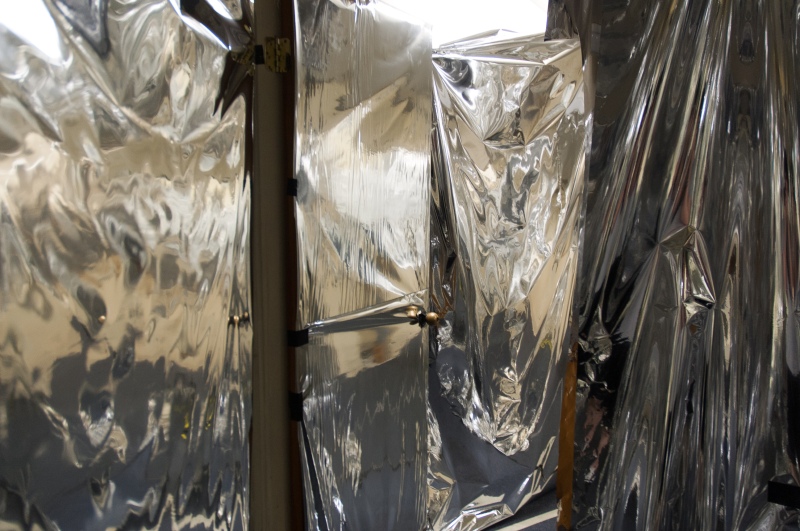 The door blocking the way into the back area. Most groups took a while to realize this was a door.

The puzzle grew out of an idea I had been toying around with since I had been a sophomore. One of my favorite puzzles on my frosh year stack was one in which we had to push buttons near speakers that played the Ride of the Valkyries (something that is “forbidden” to play at Caltech except during finals week, and can cause strong reactions from students) to stop them. I wanted to do something similar but somehow top it. My original idea involved having speakers lining a very long hallway and having the frosh chase their own voices down (fitting into the time travel theme). One of Jeff’s ideas for a puzzle was to riff on the scene from Skyfall where James Bond is in a room at the top of a skyscraper with lots of reflective windows, trying to fight a bad guy. You can sort of see how that eventually became the mirror maze.

So, how do you drive this puzzle? Most of the code was actually code from the puzzle on my frosh year stack, generously given to me by Andy Matuschak. Most of the logic was written in Ruby, with the sound part regulated by mplayer (did you know that you can arbitrarily select what channel to run a sound out of in mplayer?). I added in the part that drove the light-up buttons, which were driven by the pacdrive utility connecting to an Ultimarc Pacdrive board. The button input was processed by an Ultimarc I-Pac.

In order to actually be able to plug all of the speakers into the computer, I had to put three 5.1 surround sound cards into it (one that happened to be lying around from my frosh year, and two that I had to buy)! 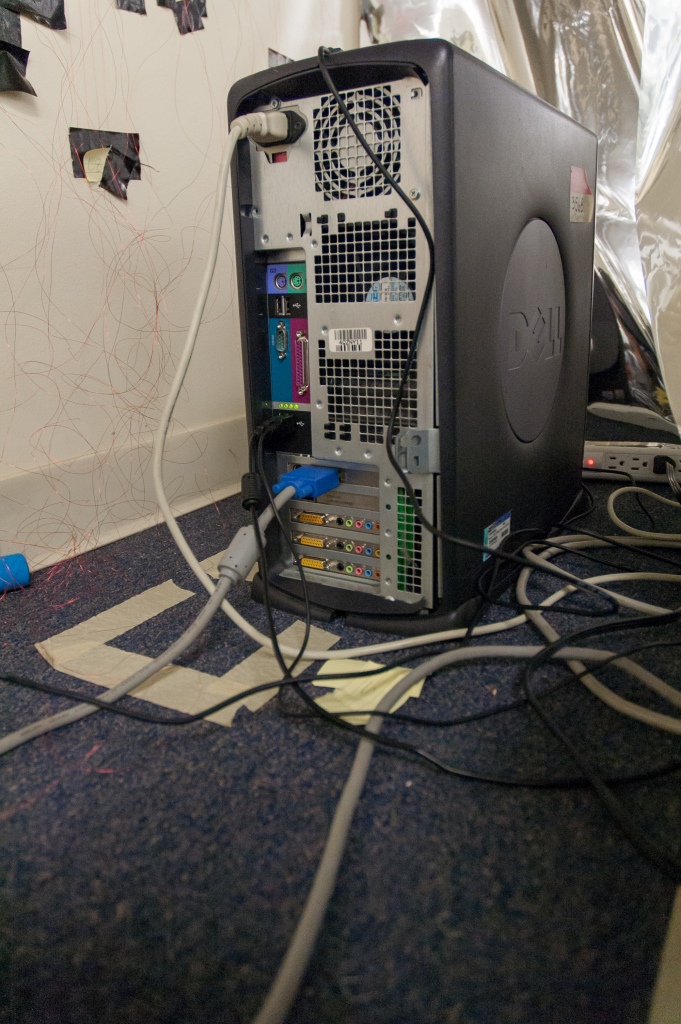 It’s hard to sell off sound cards to people these days.

For the wiring, we made the decision to cut costs by purchasing magnet wire. Upside: Incredibly cheap, given that our rough estimates for amount of wire required for this activity was about 2400 feet. Downside: Jeff spent many, many hours having to work on the wiring. It turns out that the best way to strip away the enamel insulation on the wires is to burn it off, which is a rather painstaking process.

Only kind of a burn hazard.

Also, the building we used for the mirror maze puzzle (and also another puzzle) had actually been abandoned for a few years. There was actually a lot of cleanup work that we had to do when we first got in there. 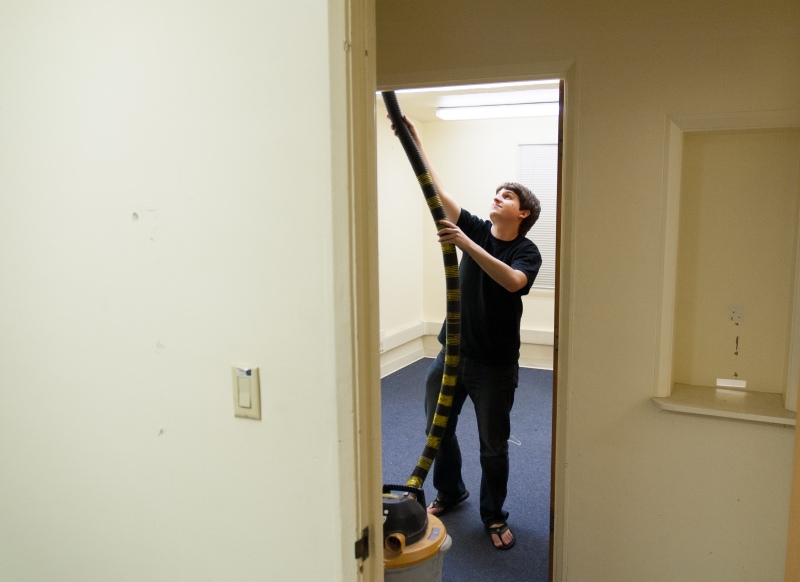 The mylar was attached directly to the ground and ceiling with gorilla tape (which we discovered was much more structural than duct tape — if you ever need to hold things up, seriously don’t buy duct tape) and then staple gunned to the carpet and ceiling. We were told we could make minimal structural damage to the building because it was slated for demolition soon anyway, so we had some fun with that. The funny thing is that that building had been “condemned” since we had been sophomores, so we were sort of dubious about this whole demolition thing. Apparently they had a demolition permit for the month after Ditch Day, though. I haven’t been back on campus to check if they actually followed through on it.

Update (2019-04-26): They finally managed to demolish the buildings a few years back. Several more years of stacks got to use the building, but hilariously had to do much more extensive clean-up work than we were asked to do.

In order to ensure that the area was completely dark, even during the day, we actually taped some black plastic to the windows underneath the mylar that ran all along the outside walls. I spent a very long time trying to lightproof the room (as usual, 90% of the effort went toward 10% of the effect), which was hard to verify because during Ditch Day construction, our schedules had shifted to be nearly nocturnal. 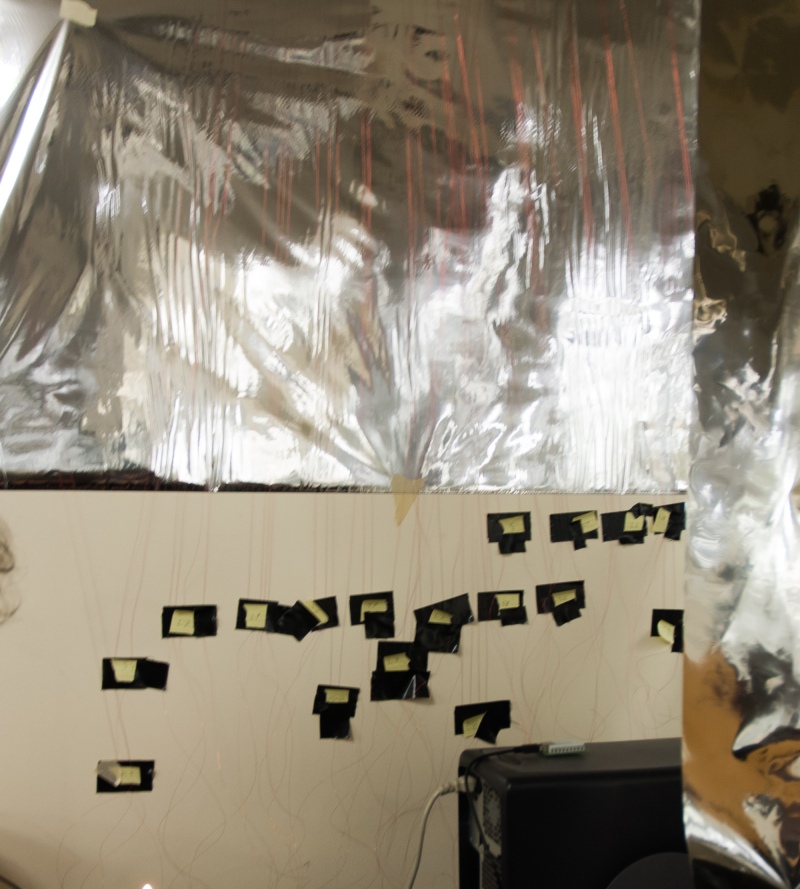 All the wires leading to the computer, with labels. I called it “modern art”.

The mylar turned out to be a great choice for the overall effect of the room. Due to the fact that it was so thin, it actually moved around as you walked through the maze. This is pretty creepy when walking around in the dark. I had moments when I was working in the area in the dark, and the mylar moved around for just a bit too long as I was walking around (alone), freaking even myself out. The idea for using mylar came from a friend from the class above ours. We had reached out to our mailing list (which had seniors and recent alums on it) asking how we could easily get a lot of large mirrors (at that point it was still a literal mirror maze) cheaply. Our friend recommended mylar, which turned out the be the most economical option.

Overall, this puzzle definitely took hundreds of man-hours of effort (thanks to all of the alums who helped us put up the physical components) and probably about $600-800 to build (between the electronic components, wires, mylar, and miscellaneous components like gorilla tape). It was entirely worth it, though, because everyone who went on it enjoyed it a lot and I think it was one of the main pieces of our stack that made it memorable.

Hilariously enough, the only group we’d taken through the maze (out of like five or six) that didn’t actually complete the activity was the group actually on our stack on the day of Ditch Day, even though we had playtested it beforehand. Somehow, the first time they went through the maze, someone managed to turn off one of the speakers. The second time, they somehow decided the puzzle was broken (it wasn’t). Even the group full of drunk alums (who started out by pushing random buttons at first) managed to solve it (after sobering up a little).

Next time, I’ll cover our other main puzzle: the “space alert,” or Synchrotron puzzle. It also took a lot of effort to build and I’m excited to share it, because it was equally cool. Unfortunately, I wasn’t quite as involved in its construction, so I probably won’t be able to provide as much detail unless Jeff has time to contribute.